A History of Advent Lutheran Evangelical

​​In Christian love you have presented these children for Holy Baptism. You should, therefore, faithfully bring them to the services of God’s house, and teach them the Lord’s Prayer, the Creed, and the Ten Commandments. As they grow in years, you should place in their hands the Holy Scriptures and provide for their instruction in the Christian faith, that, living in the covenant of their Baptism and in communion with the Church, they may lead godly lives until the day of Jesus Christ. – Lutheran Book of Worship, Rite of Holy Baptism 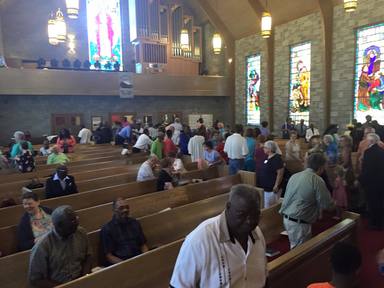 This is a section of the Rite of Baptism that enumerates the responsibilities of the Church which stands united to sponsor the newly baptized. In this Rite, the expectation is to strengthen, encourage, and build upon the foundation of Christ’s life, death, and resurrection. The following is a brief history of Advent’s witness to Christ’s life, death, and resurrection and its participation in the Great Commission: “Go therefore and make disciples of all nations, baptizing them in the name of the Father and of the Son and of the Holy Spirit, and teaching them to obey everything that I have commanded you.” (Matthew 28:20)

The history of our congregation is one of outreach and continuity. Advent began as a mission start of the Lutheran Church in America specifically called to be the “missionary of the Lutheran Church to the Navy Yard and North Charleston area in the fall of 1935.” Pastor Dermon Sox and fifty-nine people organized and began to worship in a cafeteria located on the Shipyard, as it is called. They grew in membership quickly and chartered January 5, 1936; they left the school location and built their first structure two blocks from the Charleston Naval Shipyard which it was called to do.

Since 1935, the majority of Advent’s member worked in some capacity with the Shipyard. A score of families moved from all over the state of South Carolina for an opportunity to work for the Shipyard. Between the time of her incorporation and the building of the new Church, Advent’s focus was primarily organization and education: women’s auxiliaries, men’s associations, Luther League, Mission Leagues, Sunday school, Bible studies, confirmation programs, prayer groups, and more.

Advent reached its height in membership in 1972 making it one of the three largest Lutheran congregations in the Charleston area boasting 815 Baptized members, 687 confirmed members, 473 communing members, and 198 child members with an average worship attendance of 497.

Day to day, as they spent much time together in the temple, they broke bread at home and ate their food with glad and generous hearts, praising God and having the goodwill of all the people. And day by day the Lord added to their numbers who were to be saved. – Acts 2: 46 – 47

The Rev. Dr. Fred Dufford served Advent for twenty-one years to accept a call to serve another congregation in the upstate of South Carolina. To this day, Pastor Dufford’s deep rich “voice like God’s” is still missed. Pastor Loadholt was called shortly after and had a very short tenure in comparison, four years.

​The Rev. J. Cantey Nye became the next pastor and was renowned for his teaching, his many trips to Russian and Germany, his visits to hospitals and homebound elderly members, and his non-confrontational demeanor.

God calls us into a relationship with Him through His Son, Jesus.